We have known for some time now that development in the City of Calgary is not proceeding in a sustainable manner. The COVID19 pandemic has only made this more apparent. Every aspect of city life is affected. Food insecurity, lack of affordable housing, limited public transportation and suburban sprawl are all creating problems along with a recession brought on by shifts in the oil and gas industry and covid lockdowns. Our city’s core is plagued by a vacancy rate above 25%. These problems cannot be solved using status quo thinking. We need to use our collection imagination to envision a more inclusive and environmentally friendly city. We must be brave and implement radical new solutions for positive change and development.

I made a presentation to city council at the budget meeting in 2019. Everything I spoke about is still relevant today. In fact, I’m sad to report that the city has made zero progress on any of the action items I discussed since I made this presentation. I had every intention to help Calgary become the best city possible. Over the past year my life path changed direction considerably and I am now settling in back at home in Nelson, BC. These are my departing words and I hope that I inspire Calgarians to keep fighting for a better city with these ideas. Please read my original proposal below. I have updated the text with additional ideas and sketches at the end.

Instead of focusing on the current problems our city is facing, I thought it might be more useful to create a vision for our city to strive for. We could then use this vision to guide the decisions we make now to reach the goals we want for the future. Sure, our ideas about how to achieve that differ but we need to set differences aside and find some common ground to work with. Climate change is our biggest challenge and every decision we make will have to support a transition to using way less energy and building a sustainable way of living. We need to make some compromises. So, I think it might be easier if we set a common goal, a vision for our future. Let me describe the city I want to live in. Maybe we’ll discover that we all want the same thing and it will be easier to start making some plans:

As I walk down the street I see all sorts of interesting and colourful buildings. Some are staggered four story walk-ups with green balconies and roofs. Some are quaint older homes carefully restored and retrofitted for energy savings. Some are duplexes, triplexes and even lane way housing to accommodate all, couples, families with children, singles, the elderly and all income levels tightly knit into streets full of green space. I know most of the neighbours. It feels safe here. Tall trees and urban farming plots are everywhere lining the boulevards and alleyways. Sometimes it is hard to tell the difference between a street or an alley. Many garages have been converted to homes. Food security is no longer an issue because we have converted so much empty lawn space into edible gardens and forests. Now close to 60% of the produce we eat is grown right here in our city. Community centre commercial kitchens buzz with activity preserving food. These centers also feature tool lending libraries and repair cafes. Families have saved so much over the years because of the lending libraries. Community Halls are much more of a community hub than they ever were in the past. Many also have full time city employees administering the various programs. 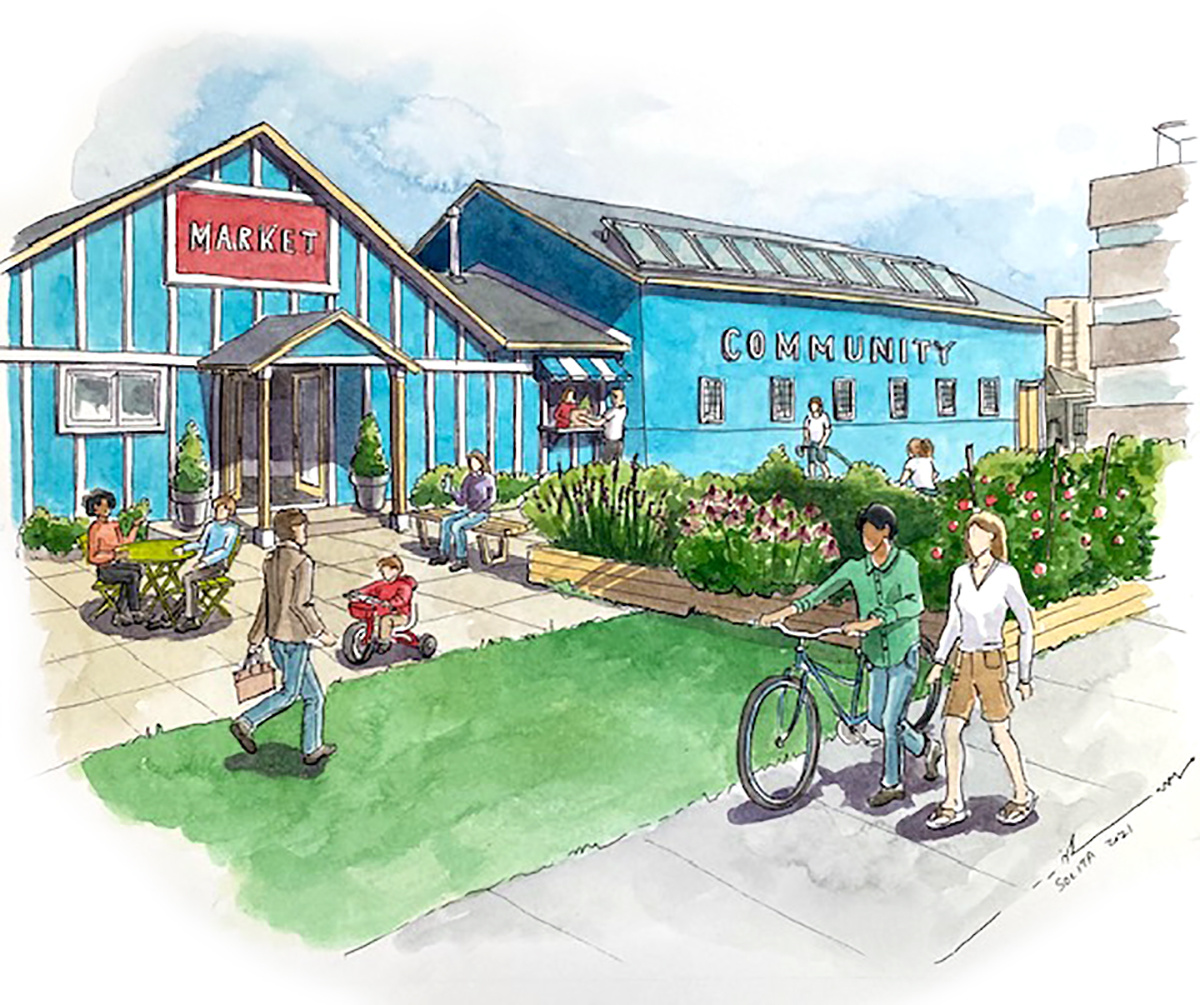 I venture farther down the street and the landscape gets busier as I get closer to one of the many Main Streets that every neighbourhood has. At street level it is human scaled and walkable even with a few taller apartment buildings standing in the mix. There are still a few vehicles making their way slowly down the street past groups of pedestrians and cyclists. But, personal vehicle ownership has fallen out of favour since the city gave active transport the priority and improved public transit considerably. Every community has a car share program, but for the most part, other forms of transport are more efficient. There are still a few remaining vehicle arteries through the city maintained for longer trips, hauling cargo or emergencies but Main Streets are for people. There isn't a need to travel as much and as far because every Main Street has all the amenities you need - groceries, hardware, gift shops, art galleries, music venues, coffee bars, shoes, restaurants, clothing, bakeries, schools, sporting goods even clean, public washrooms on every block and in parks too. The architecture is diverse, interesting and inviting. The air is clean and the streets are filled with only the sounds people talking and children playing. There is no need for traffic control lights anymore, except on those few remaining arteries. The patios lining the street are busy almost year round now. Active transport forces one to dress for the weather so why not also enjoy a hot beverage outside with your neighbour and watch children make snowmen in the park close by.

The parks have improved greatly since the city added more to the  budget. More trees have been planted, local indigenous species of plants and animals have been allowed to thrive and now walking though these parks is almost like walking through forests. In fact, because much of it has been restored to natural habitat it actually costs less to maintain, for example pesticides and irrigation are no longer needed. The parks also maintain free seasonal activities that all citizens may participate in. There are outdoor skating rinks and ski trails you can get to by foot in the winter. In the summer, there are outdoor pools, beaches along the river and other amenities including urban camping. Public washrooms are staffed and maintained year round. It became impossible to build and maintain so many additional recreation centres so the city started investing more in its parks and working within the seasons. Also, no other city will ever match the amount of cycling pathways we enjoy. Not only did we initially build a great recreational network but we now have an urban system that people around the world envy. School buses are no longer necessary. Most children walk or bike to school and a few take public transit. 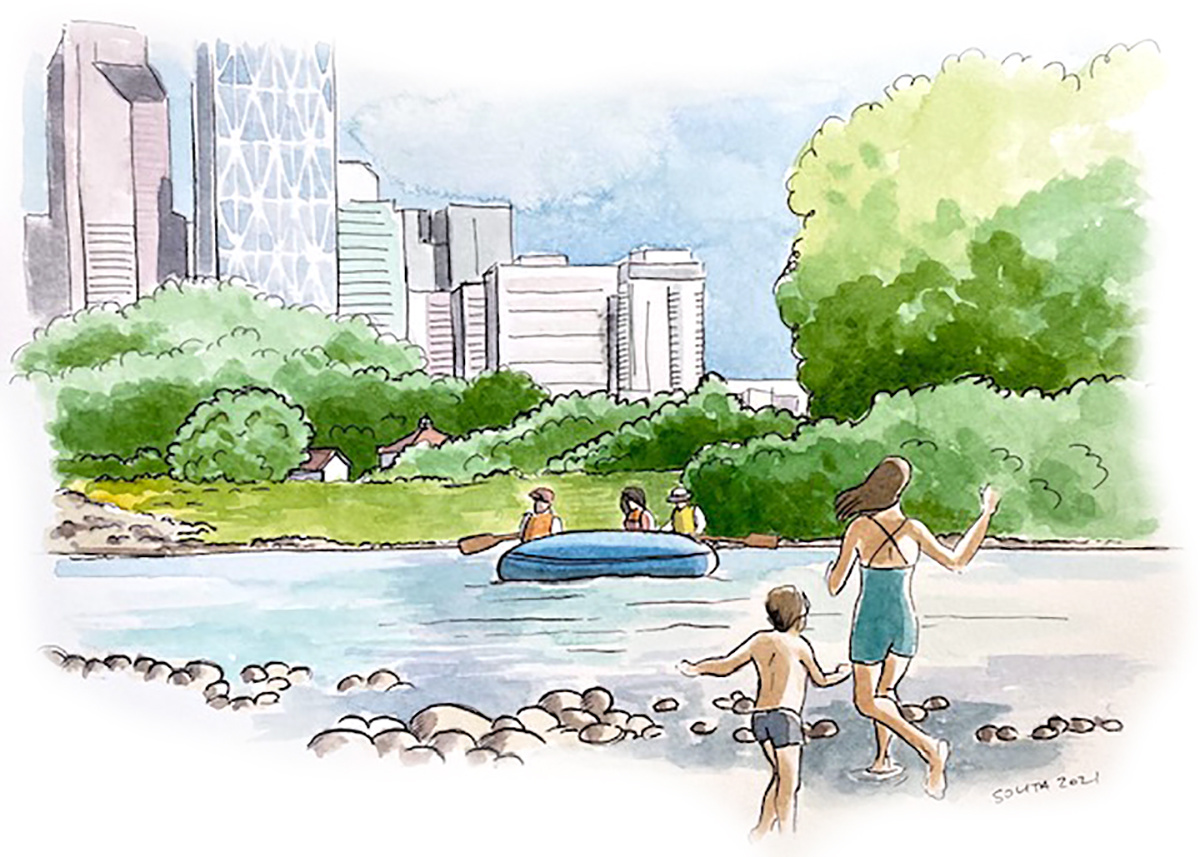 People want to travel and move here. The city opted to collect taxes based on square footage instead of land value so now it is possible to afford a nice home or start a little business in any neighbourhood of your choice. This new tax structure helped shrink the income gab between the rich and poor and created incentives to live smaller and aided in the transition to a low carbon economy. It was a wise decision to use the carbon tax to help energy companies transition into renewables. The funds enabled them to retrain our young, educated citizens for work in this new field quickly. Our downtown core is bustling again but with a different kind of activity. The streets have more green space and less vehicles. Many more people live here too. Density increased. Office towers are powered and heated by an array of renewable technology that we now export to the other countries. We make a lot more of our own stuff too. Some manufacturing has returned to the province. We have finally reached a target of zero waste. We have lots of jobs in clean energy technology, recycled manufacturing, food production and more independent business owners than ever before.

Sure, it was bumpy ride getting to this point. Citizens didn't want to give up their private vehicles at first. Public transit just wasn't efficient enough. They didn't want to pay more taxes on their bigger houses either. Heat and water was expensive. Inequality was making the transition tough on low income earners too. There wasn't enough affordable food or housing to go around and relying on charity just wasn't enough. But our politicians had a vision. They made tough decisions and explained to its citizens that if we used our budgets for building roads and endless suburbs our taxes would continue to rise. We would never meet our city-stated climate goals, in fact we wouldn't even be able to deliver basic services. Instead, these wise politicians invested in other more efficient items like walkable density, food security, public transit, cycling routes throughout the entire city, and Main Streets to the benefit of every Calgarian.

We built the thriving, diverse, clean and interesting city we all craved. No one would go without anymore, we just had to do with a little less during the transition. These politicians found innovative solutions to immediate problems and helped foster pride in every citizen by working together in unity. When everyone realized that we were all striving for the same goal, a sustainable, healthy city, it became easier to accept the big changes and modify our own behaviors to help reach those goals. Our politicians chose to act decisively in the face of Calgary’s biggest threats and left us a legacy that we are all proud of.

This is my vision for the future of our city. There are many more things to add but I only have five minutes. I think I have covered some of the most important issues.

I would be surprised if this wasn't the sort of city you would like to live in. In keeping with this vision, I am asking you to consider all the possibilities, recommit to achieving Calgary’s stated climate goals, spend money to get us there, commit to long term funding to continue this crucial work, and show the people of Calgary it's the path we should take. Make the tough decisions to get us to a safe future, take decisive action. Think about the long term future of generations to come. Do something big cities haven't done before. It’s your job to make the difficult decisions for us and make sure you accomplish what you agreed to do. We elected you to do this work. You’ll never be able to please everyone but you can do the right thing and the majority will support you. Start working together. Leave a legacy behind that we will all be proud of. Give Calgarians a reason to vote for you again.

In closing I would like to offer some possible immediate solutions to consider:

I don’t want to hear “this has never been done before” or “we can’t”, try it anyway. Push the boundaries. Humanity is depending on this type of thinking and cities have the most opportunity to this. 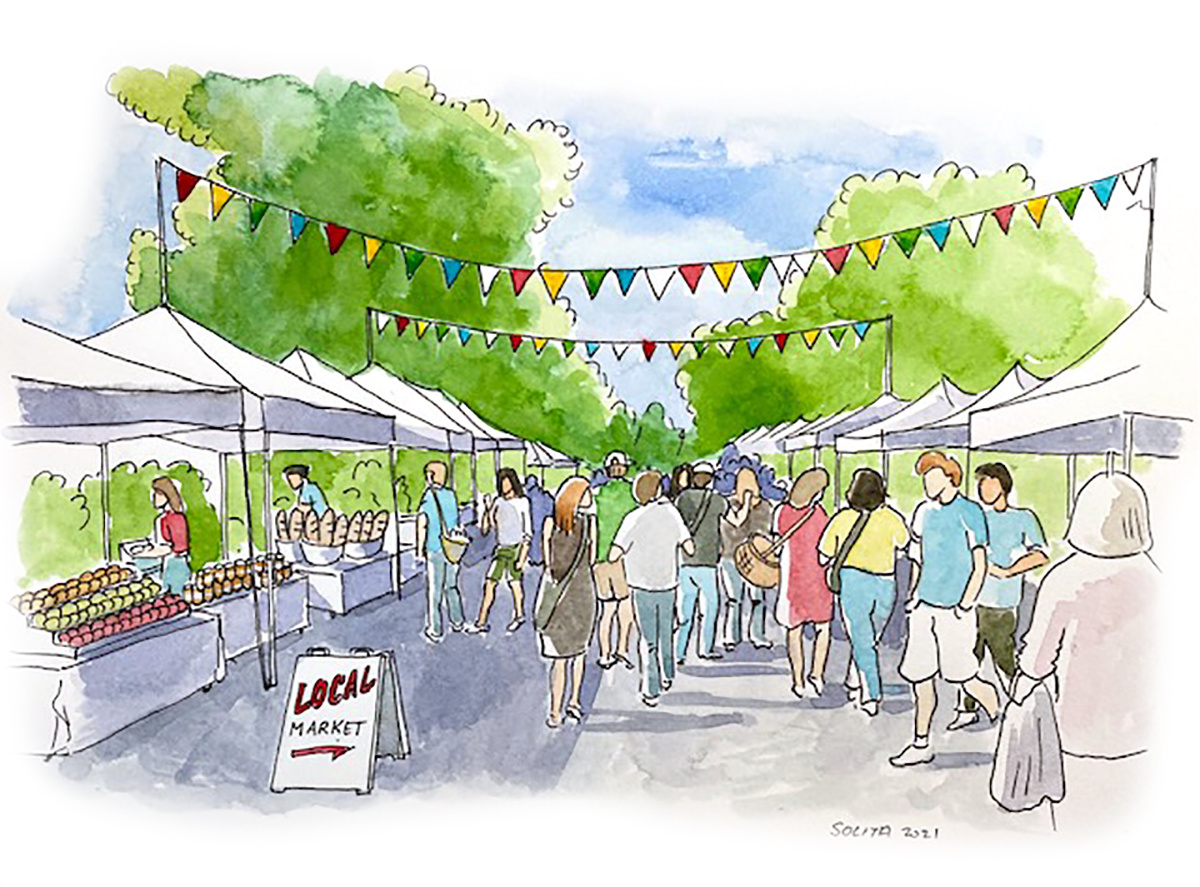 This fall, you will have the chance to select new leaders in the civic election. This will be a pivotal time to help shape the future direction that Calgary will proceed in. Vote for candidates that are offering clear and timely policies and solutions. To kick start this process, I have come up with a number of additional ideas to get your imaginations running:

Perhaps, you will ask candidates to add some of these ideas to their platforms. Perhaps, some of these ideas will become reality finally making Calgary the world class city you desperately wish to see. I’d love to hear your ideas too. Please email your ideas to [email protected]. Even though I no longer live in the city, I still have very strong ties there. Problems that Calgarians solve are problems that people are trying to solve everywhere. Solutions established in Calgary can be applied to other communities. Although I'm happy to be home in BC now, there are lots of things I will miss in Calgary. I will be back to visit often. I look forward to watching your progress.

Next blog will be all about rural life in the West Kootenays and building Bear Spring Eco Retreat : )

You have no items in your shopping cart...